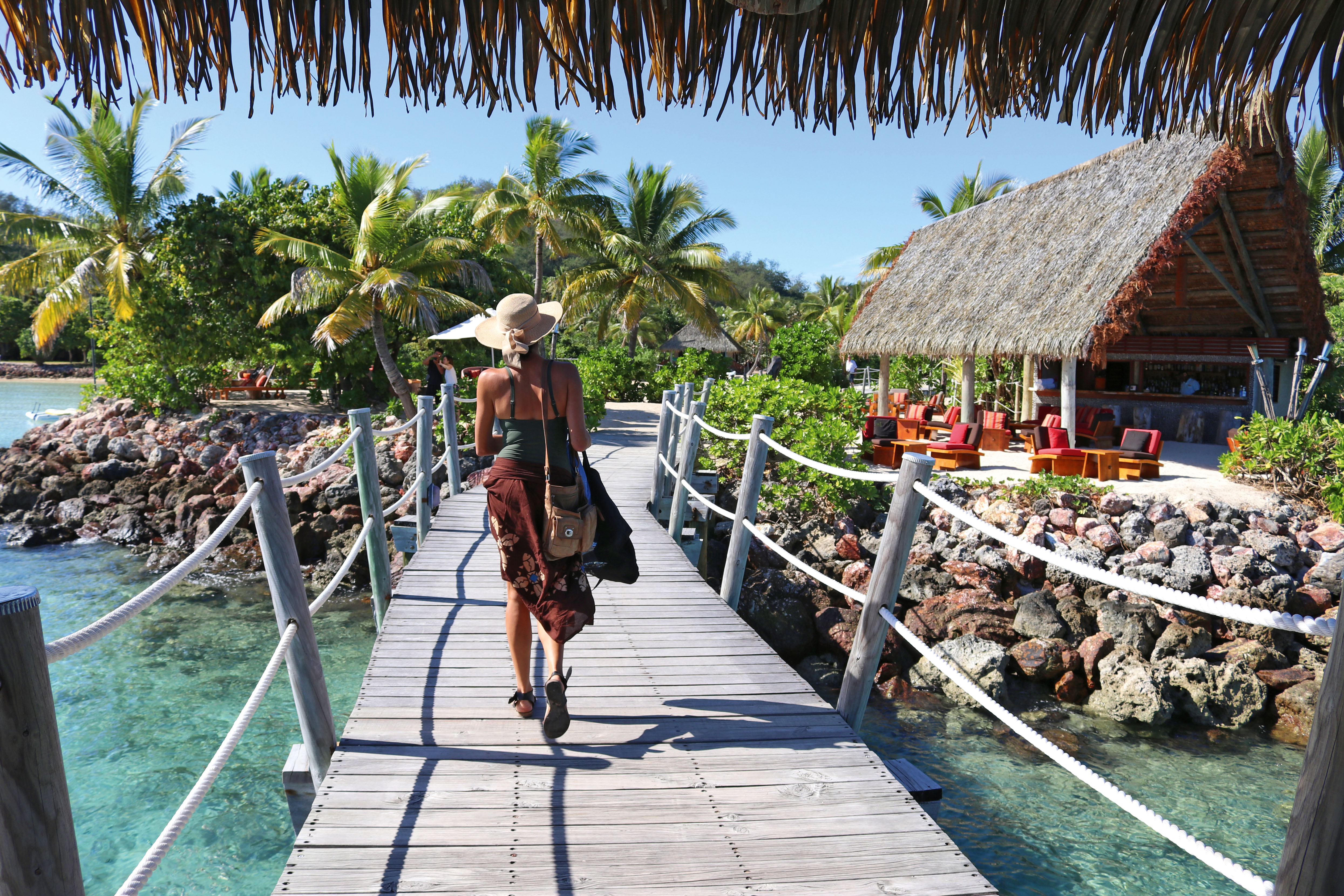 A sparkling gem in the Pacific Ocean, Fiji’s Malolo Island is simply unmissable – here we reveal five reasons to visit.

The lullaby-like welcome song ‘Bula Maleya’ is as warm as the weather as you arrive on Malolo Island. With swaying coconut trees, the sound of the ocean lapping at your bure door and stars so bright and plentiful it’s like someone has exploded a glitter bomb in the sky, it’s not hard to see why the largest island in the Mamanuca archipelago should top your list when visiting Fiji.

Ready to escape? Check out this award-winning adults-only retreat.

Leave the kids at home and head for the adults-only Likuliku Lagoon Resort which sits in a natural ocean lagoon. Here, fresh South Pacific seafood and lush tropical fruits and vegetables are turned into an art form on the plate. Think salmon tartare, soba noodles, wakame seaweed and togarashi dressing, followed by pan-seared mangrove jack, celeriac, enoki and sumac. Two outdoor beachside decks are the perfect place to rekindle romance or take a picnic lunch to nearby Mociu, Likuliku’s private island. If you’re bringing the little ones, head to the family-friendly Malolo Island Resort. Dine barefoot in the sand at the Beach Bar while you watch the sunset, or head to the old plantation homestead for a Pacific Rim dining experience.

You can stay in Fiji’s first overwater bungalows

From Denarau Island, it’s just a 45-minute speedboat to Likuliku Lagoon Resort – or you could arrive by seaplane or helicopter. The Fijian, family-owned resort is a National Geographic Unique Lodge of the World, the only in Fiji, and one of only two in the Pacific to be accepted into the group. It’s also home to Fiji’s first overwater bungalows perched over a turquoise lagoon teeming with marine life. Or, you can choose a beachfront bure with supersized living rooms where you pull back the curtains to turquoise ocean as far as the eye can see and waves gently lapping metres from the door. The only thing between you and white sand is a deck with a huge day bed to one side and, in some rooms, a private plunge pool on the other. Could there be a better reason to visit Fiji’s Malolo Island?

It’s the perfect base for island hopping

Your first stop should be the tiny Mociu (Honeymoon) Island, which can only be accessed by Ahura guests (Ahura owns both Likuliku and the neighbouring Malolo Island Resort). The island is a nature reserve and its crystal-clear waters have been declared a marine reserve by the local chief.

Or, make a day of it and head to Qalito Island, home to Castaway Island Resort, and then further north to Mana Island, where the US Survivor crew stay when they are shooting at Monuriki. It was also the location for the movie Cast Away featuring Tom Hanks. The island has also been listed as a national site of significance due to its biodiversity.

For the active, Namotu Island is where you can access Fiji’s best surf breaks (including Cloudbreak). If soft adventure is more your thing, head to Malamala Beach Club, the world’s first beach club on its own island, where you can snorkel, paddleboard or simply while away the day under a swaying palm. To step it up a notch, try Fiji’s only two-level floating platform, Cloud 9, among the sparkling waters of Vanua Malolo on Ro R Reef. Here, you’ll be entertained by DJs playing chilled-out tunes while you sip top-shelf drinks.

It’s a haven for endangered wildlife

Back at the resort, meet ‘Malolo’, the island mascot and one of the island’s critically endangered iguanas. This specific species was thought to be extinct, as no one had seen one for 25 years. Then, one happened to fall out of a tree and tests confirmed it was the Malolo species. A program was initiated to save the population by controlling cats and rats and establishing a breeding facility. Now, when you visit, you can not only meet the mascot (be warned, he likes to crawl onto people’s heads), but you can plant trees to help the population’s survival, along with the entire diversity of the island. Fun fact: the iguanas distribute seeds in the forest through their faeces. The island’s sustainable initiatives also extend to producing its own honey in onsite beehives, growing its own vegetables and herbs, and establishing a coral reef restoration program.

Take the short, but very steep guided hike to the hilltop on Mociu (Honeymoon) Island for a pale pink sunrise that is sure to take your breath away. For spectacular underwater sights, stride straight out from your bure (or climb down the stairs if you’re in an overwater one) and snorkel with angelfish, parrotfish, turtles, and blacktip sharks. Life doesn’t get much better than that.

Read more: Magical Moments: 8 of the Most Breathtaking Experiences in Fiji