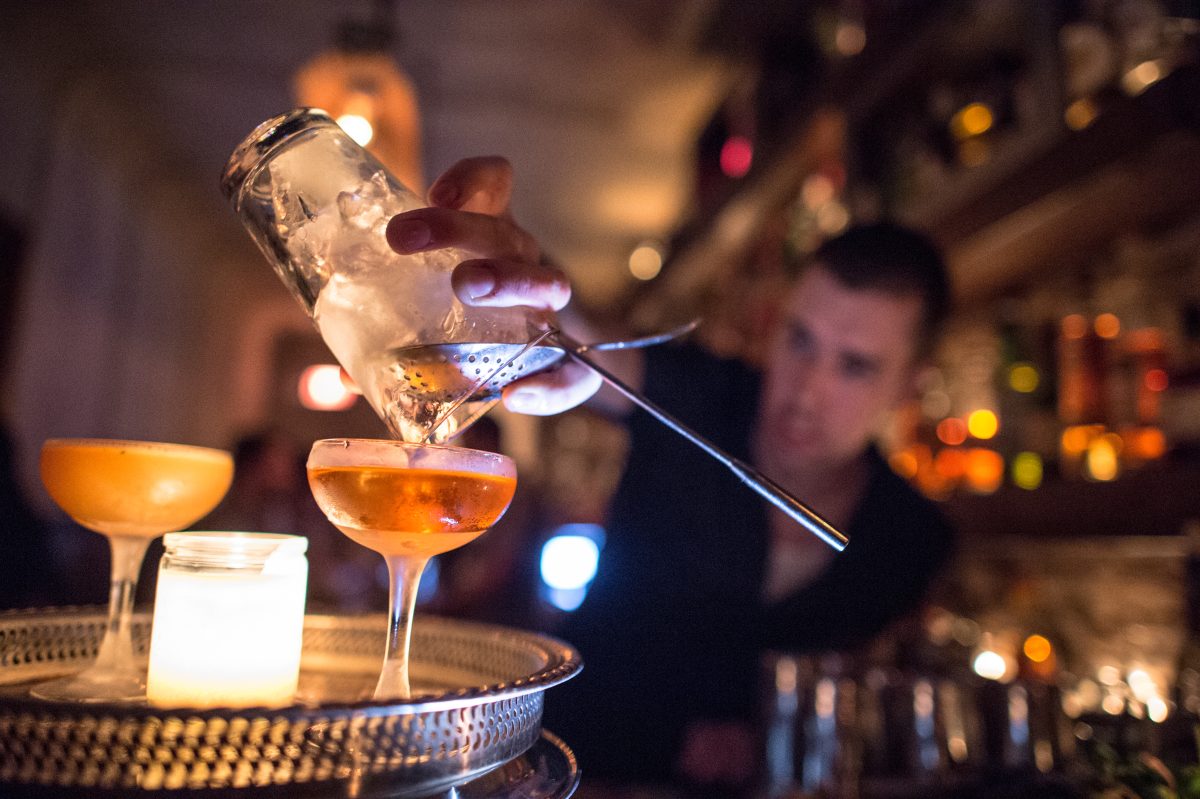 Under the flashy façade of the Big Apple’s dining scene lies an alluring secret – the hidden New York bars, secret kitchens and concealed restaurants only visible to those in the know.

We all know the saying ‘don’t judge a book by its cover’ – an adage to remember when discovering concealed New York bars and hidden restaurants in the city. Inconspicuous doors, underground basements and even a cosy neighbourhood bodega swing open to reveal vintage bars serving up everything from fresh, hand-pressed burgers to upscale izakaya dishes. Combine these with spectacular cocktails and you’ll soon come to realise that the best haunts are often the hardest to find.

What was once a secret venue concealed behind velvet floor-to-ceiling curtains has become one of the top places for classic American burgers – welcome to Burger Joint, the hidden inspiration behind NYC’s burger craze. After gaining popularity with the masses, the restaurant branched out to three different venues, where the Works burger is still the ultimate favourite across the board. Think slightly charred but insanely juicy beef patties, topped with a generous number of classic condiments, a peppering of sliced pickles and a soft, buttered bun. Wash that down with a chocolate milkshake and you’ve got yourself a quintessential New York staple.

For an intimate taqueria and tequila bar: La Esquina

In the middle of downtown New York sits the inconspicuous La Esquina, a small taqueria selling bites of authentic Mexican street food so delicious that crowds gather day and night. An unmarked door lies dormant in the daytime, revealing itself as the entrance to an exclusive tequila bar and Mexican brasserie by night. Vintage-inspired and intimate, the basement is filled with mouthwatering aromas, wafting from dishes like grilled barbequed ribs drizzled with chile guava sauce, and sliced steak and melted cheese taquitos. You’ll come for the food and stay for the drinks: choose from a wide array of tequilas and signature margaritas to pair perfectly with your dinner.

Don’t be fooled by the understated exterior of Carbone – this iconic Italian restaurant has been the go-to spot for A-listers and celebrities since it opened in 2013. It’s coveted for its cosy atmosphere as much as its Michelin-starred cuisine (don’t leave without trying its signature spicy vodka rigatoni). The moody vibe is a nod to the Italian-American culture of the 50s, with a touch of modernity and sophistication thrown in. Not surprisingly, it’s almost impossible to get a reservation, making it not just elusive but also often only accessible to those in the know.

For bespoke cocktails based on your mood: Attaboy

Tucked away on an obscure corner of Eldridge Street, Attaboy combines elegant laid-back décor with pure bartending artistry to create a unique no-menu bar, serving everyone on a first-come, first-served basis. Ring the bell on a nondescript grey metal door – only distinguishable from the others by the letters ‘AB’ – and enter one of The World’s 50 Best Bars. Upon venturing inside, your only responsibility is accurately conveying to the charming bartenders what mood you’re in, as that determines what cocktail you’ll be served. Have no fear, as Attaboy has proven time and time again that its cocktails are sublime, its hospitability is warm, and customers are always satisfied.

If you’re looking for the concealed Tomi Jazz bar, odds are that asking the deli across the street would help more than any map. Or, follow the sounds of muffled saxophone solos and patrons’ chatter to an underground basement door, where the nostalgic bar provides solace to the after-work crowd, hungry gourmands, or just visitors on the hunt for a comfortable speakeasy. Alongside the mellow jazz performances, the bar serves up enhanced izakaya fare, from creamy cod roe spaghetti to saucy okonomiyaki, with an extensive range of Japanese sake and whiskies to follow.

For a secret bar inside a bodega: The Little Shop

You’ll be forgiven for thinking you’ve gotten the address for The Little Shop wrong, as you enter a neighbourhood bodega filled with all types of snacks, essentials, and even pastries. Venture further in (and grab some treats if you please) to find a vintage bar and lounge hidden behind a shelf. Bask in the cosy atmosphere, elevated by mismatched porcelain plates, eclectic flower arrangements, and aptly named handcrafted cocktails. Try the mezcal negroni slushie, sip on a miso-syrup and gin concoction, or go for the classic chilled espresso martini. The best part? You can customise your bar snacks to whatever you’ve purchased from the bodega in front.

If you’re hungry for more things to do in NYC, check out 7 Things Not to Miss in New York’s Nomad Neighbourhood.