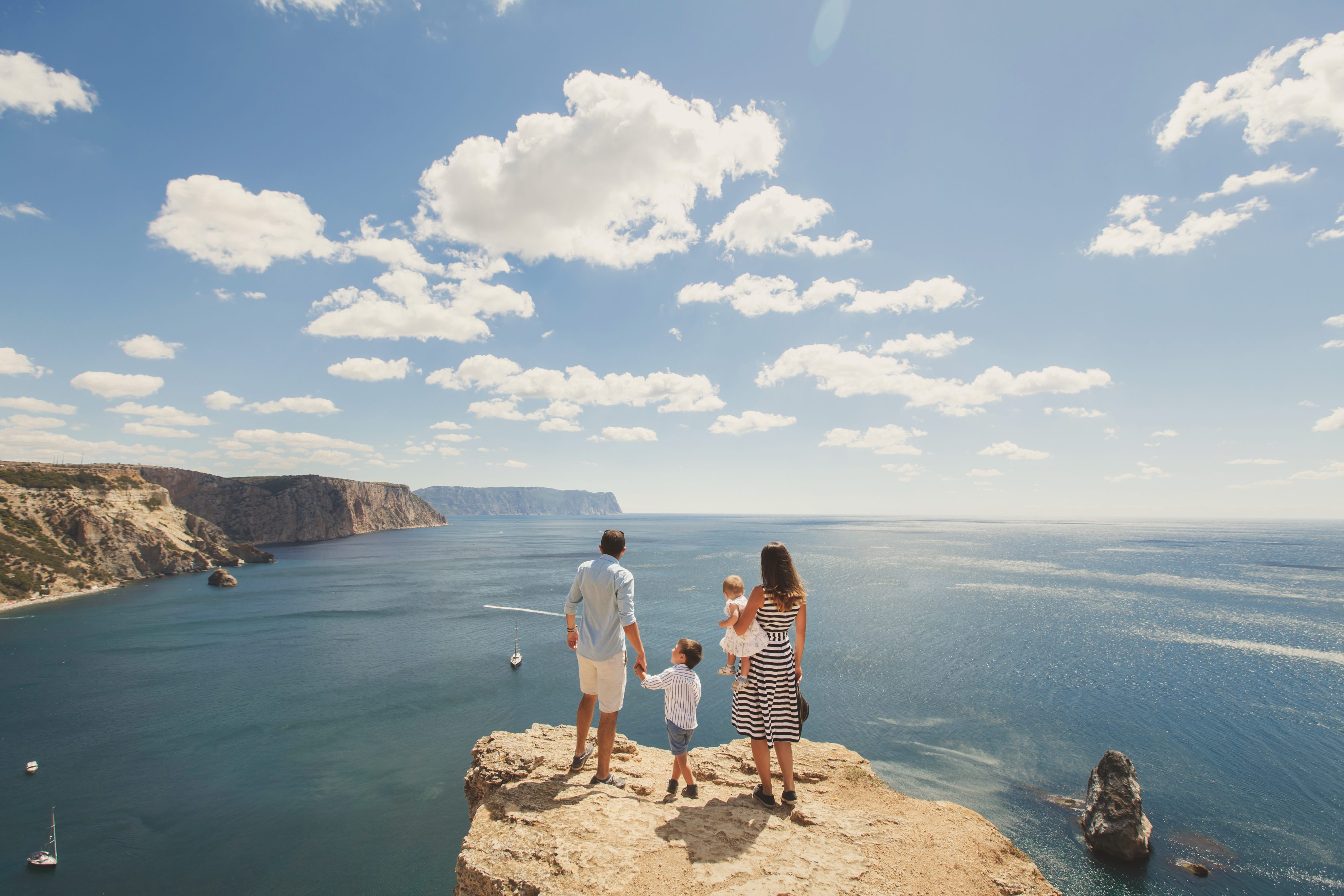 Wondering how to travel with a baby? It doesn’t have to be as scary as it sounds – as long as you prepare, prepare and prepare some more.

As the world starts to open its doors once more, families are reunited and new parents might bravely consider venturing abroad for the first time. After months at home, the prospect of a long-haul flight with a tiny person may feel intimidating: but all it takes is some savvy preparation.

As a British expat with a now-toddler living in Australia, I’ve travelled abroad with my mini-me several times and lived to tell the tale. Yes, it may involve more luggage than you ever thought it was physically possible to juggle, a flash of dismay on fellow passengers’ faces as you settle in next to them for the long haul and the interesting challenge of trying to change nappies over an aeroplane toilet – but it’s all part of the parenting adventure, and the rewards are well worth it.

Wondering how to travel with a baby? Here’s what I learned on the 24-hour journey from Australia to England with a nine-month-old.

Jet lag is a cruel mistress, so if you have the opportunity to break the journey up and ease yourself into the new time zone, take it. Not only does it provide a much-needed interlude from flying, it’s also an opportunity for adventure – especially if it’s somewhere you’ve never been before. We stopped in Singapore (somewhere we’ve always wanted to visit), which helped us, and our little one, to adjust to the fluctuating time zones.

Stock up on milk and snacks

Regular mealtimes and routines go out of the window on this magical journey through space and time. Beer at 7am in the airport bar? Oh, go on then.

But this sudden break in routine may not feel quite as exciting to your baby – and can you imagine anything worse than being caught out with no milk while you’re high in the sky? If you’re breastfeeding, you’re all sorted. Formula-users, be prepared to pack more than your usual allowance for that 24-hour time window. Onto solids? It’s amazing how a well-timed corn puff can keep a little one happily entertained for a few precious moments – and they’re light as air, so you can easily take 5,635 packets.

I bought several small, inexpensive toys and covered them in wrapping paper, unveiling them at perilous points in the journey when a distraction was called for. They provided the dual joy of tearing off the crunchy paper and then discovering the toy itself. Just try to avoid choosing anything too noisy – sleeping beauty in the row behind might not appreciate the jingle-jangle of a bell rattle…

I discovered on our journey that my little one is obsessed with paper cups, which kept him entertained for a surprisingly long stint. In fact, we had to prise said soggy, chewed ‘cuppy’ from him before the departing flight. Who knew? The little plastic trays your food comes on, paper napkins, pillows… they all hold an unexpected intrigue for little fingers, apparently.

Pack enough spare clothes… for everyone

All it takes is one unfortunate vomit for you to become the person NO ONE wants to sit next to (if you weren’t already, that is). Be sure to pack a spare T-shirt and joggers for Mum and Dad along with several spare onesies and vests for baby. We all know how many things can go wrong in 24 hours, even with our feet on the ground.

Whenever we could, we’d lay a blanket out in the airport and let baby have a kick about and play to burn off some steam (unfortunately it’s not socially acceptable for an adult to do the same, otherwise I’d have drawn up a spot right next to him). No one likes being cooped up in the same position for hours, so this allowed him precious time to exercise and tire himself out before the next sedentary leg of the journey.

We anxiously confirmed ahead of our flight that we’d have seats with that seemingly all-important bassinet. In fact, if we had a dollar for every time we used the word ‘bassinet’ before we flew, we probably could have upgraded to Business Class. And guess what? Baby hated it. With all the noise and exciting new people to look at on the plane, the last thing he wanted to do was lie quietly staring at the ceiling. However, babies come with a lot of equipment, so it still proved very useful as a storage device for the countless bottles, toys, snacks and spare clothes we needed at our fingertips.

The CoziGo is a blackout cover that fits over the bassinet or pram, enabling your little one to have a darker, quieter space to snooze in. There’s so much going on on the plane and in airports that this cover prevents baby from getting overstimulated (the archnemesis of sleep). Although my bébé didn’t make full use of his in the bassinet, we found it really useful for his naps in the airport. Before each flight, I noted down his optimum sleep times (taking differing time zones into account) and popped him into his pram with the cover on whenever possible to get in those precious Zs.

You are going to have a LOT of luggage on this trip, so do yourself a favour and save weight wherever you can. A lightweight, foldable pram will be priceless as you pass through the airports: lifting baby out, packing it down, putting it back up, buckling baby back in… We used the Silver Cross Jet, which folds down to become the perfect size for the overhead hold, meaning you don’t have to check it in – and can use it right up to the gate.

And finally… remember to enjoy it!

Although it felt like a challenge at times, when I look back on photos of us on the journey, I know I’ll always remember the experience with fondness. After all, it was our first trip as a family and our little one’s first adventure on a plane: and in these precious early years, there really is magic to be found in every moment.