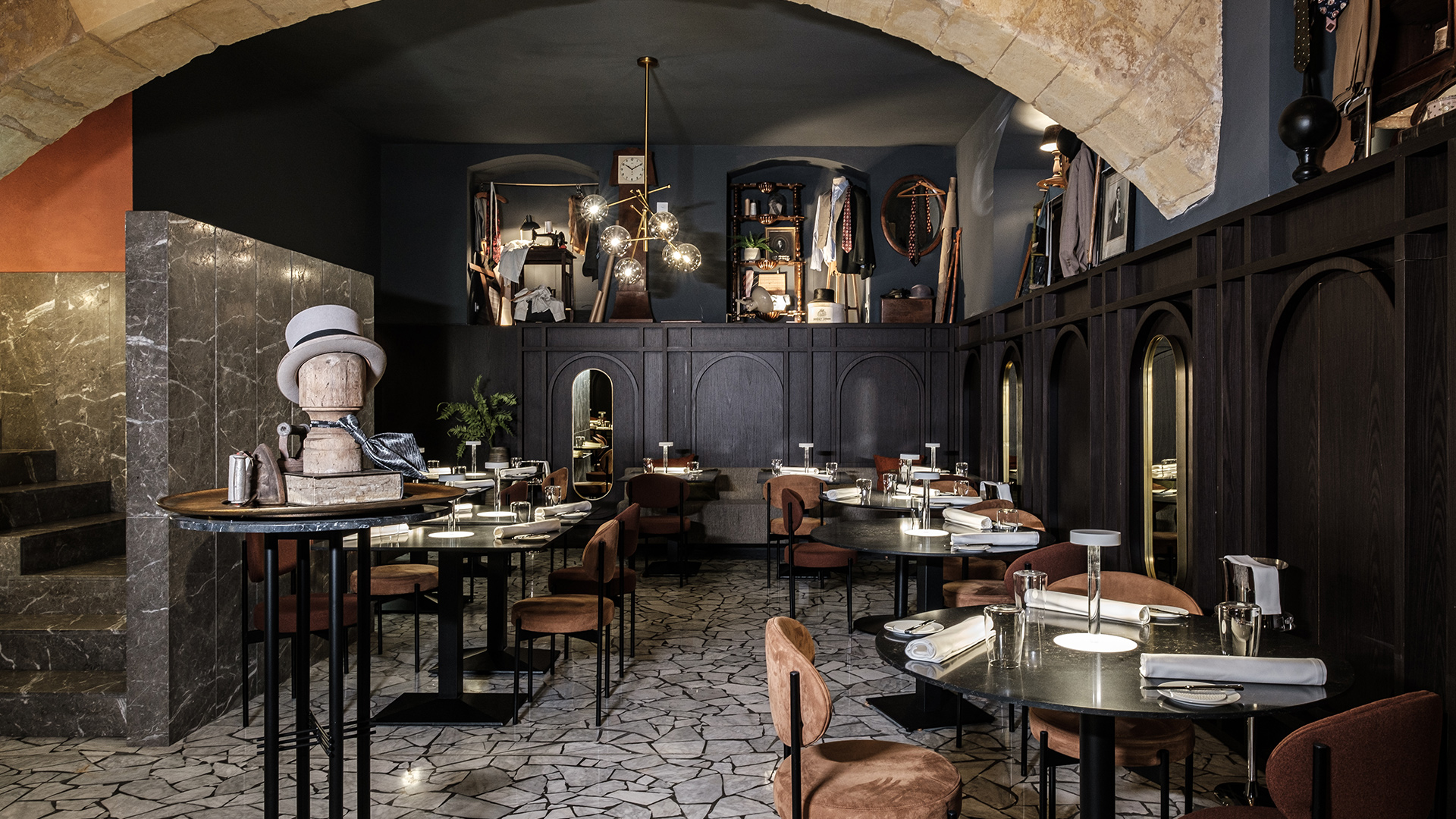 There’s hotel dining, and then there’s Michelin-starred hotel dining: these are the restaurant experiences worth travelling the globe for.

Serious gourmands will traverse any distance in pursuit of the world’s finest dining experiences – and these luxury hotels are foodie destinations in themselves. Here, guests can indulge in exquisite, Michelin-starred cuisine by world-acclaimed chefs, without having to leave the comfort of their hotel.

From the celebrity glamour of Cipriani on Rio’s glittering Copacabana Beach to Restaurant Andrew Fairlie at Gleneagles in the windswept Scottish Highlands – these are the most exceptional Michelin-starred hotel dining experiences in the world.

Nestled in Malta’s UNESCO World Heritage-listed capital, Valletta, is the luxurious Rosselli AX Privilege, where some of the finest dining on the island can be experienced.

The 1* Under Grain is the jewel in the hotel’s glittering crown and a nod to the area’s fascinating heritage. The name ‘grain’ takes inspiration from the old tailor’s workshops on nearby Merchants Street: to ensure fabric doesn’t fray, a dressmaker must cut it along the grain – the same way a chef must ‘go with the grain’ of his ingredients to ensure the optimum result. Charming nods to the theme include menus designed like sewing patterns and bills presented on pin cushions. And the food? Expect classic French cuisine such as tartare of black angus beef with smoked chantilly and slow-cooked milk-fed veal in smoked honey.

Ready to indulge? Check out our exclusive offer for the hotel here.

Nestled in Florence’s historic heart is the 18th-century Baglioni Relais Santa Croce – the only property in the city with Relais & Châteaux accreditation and site of the largest suite accommodation in Florence. It also happens to be home to one of Italy’s finest and most celebrated restaurants, the 3* Enoteca Pinchiorri.

Dining here is a true experience, with Italy’s world-famous cuisine elevated to an exquisite level. Respect for tradition is perfectly balanced with an exciting desire for innovation, resulting in dishes such as risotto with carrots and star anise, lamb from the Lucanian Dolomites and panna cotta with almond, lemon mousse and rosewater. Living la dolce vita indeed.

Ready to indulge? Check out our exclusive offer for the hotel here.

The world-famous Hôtel de Paris Monte-Carlo is home to not one, but two Michelin-starred restaurants (the second being the 1* Le Grill) – but it’s the hotel’s 3* signature restaurant that really knocks the silk socks off its well-heeled visitors.

Created by legendary French chef Alain Ducasse and his protégé Dominique Lory, the Riviera-inspired menu at Le Louis XV- Alain Ducasse is described as ‘haute couture’ and showcases regional produce including local fish, herbs and vegetables from the hinterland. Combined with palace-like surroundings dripping with gilt and glittering chandeliers, this is truly a once-in-a-lifetime dining experience.

La Yeon is the world’s first Korean restaurant to be awarded three Michelin stars, which should surely pique the interest of those in search of the epitome of fine East Asian cuisine. With sweeping views over Namsan Park, the restaurant calls the 23rd floor of The Shilla Seoul home – a top-notch luxury hotel with an A-list clientele made up of heads of state, celebrities and business power players.

The restaurant uses time-honoured techniques to create contemporary dishes that exquisitely showcase the healthy ingredients and balanced flavours South Korean cuisine is renowned for. From chargrilled beef ribeye to cuttlefish salad with yuzu-flavoured jelly, this is an education in quintessential South Korean cuisine.

Want to treat yourself? Check out our exclusive offer for the hotel here.

For nearly a century, this sprawling 850-acre country estate, nestled amid Scotland’s Ochil Hills, an hour from Glasgow and Edinburgh, has welcomed well-to-do country folk and Londoners in search of rugged Scottish beauty – and the utmost luxury.

After working up an appetite on one of the estate’s three championship golf courses, residents can sit to dinner at the 2* Restaurant Andrew Fairlie. Dishes are crafted using the very best ingredients Scotland has to offer, together with vegetables, herbs and edible flowers from the estate’s Victorian walled kitchen garden. The signature dish? Scottish lobster, house-smoked for five hours over whisky barrel chips.

Despite its location amid the urban metropolis of Shanghai, this luxury hotel offers exclusively villa-only accommodation. Perhaps it’s natural, then, that this homely atmosphere should extend to its signature 1* restaurant, created by French chef Pierre Gagnaire (of Sketch in London).

Inspired by a Parisian salon, with a nod to the old-world glamour of 1930s Shanghai, Le Comptoir de Pierre Gagnaire beckons diners into a softly lit cocoon, where dishes of the finest local ingredients are crafted using traditional French cooking techniques. Start with caviar and ascend to traditional dishes such as cocotte of frogs and grilled rib-eye.

From chocolate to watchmaking, Switzerland is world-renowned as a purveyor of the finer things in life. When it comes to cuisine, the 3* Cheval Blanc is its elite, ranking as one of the 100 best restaurants in the world thanks to its endless list of prestigious accolades. It finds its home within the 300-year-old Les Trois Rois, a grand hotel in the heart of medieval Basel on the banks of the Rhine.

The hotel has been frequented by countless members of royalty, rock stars and poets throughout its illustrious history. Bringing a Mediterranean and Asian twist to French cuisine is founding chef Peter Knogl, whose team serves dishes inspired by the best nature has to offer: fillet of red mullet with crispy scales, saffron and fermented garlic, and Nebraska entrecôte with bell pepper and eggplant.

The glittering white Copacabana Palace, which towers over the sands of Rio’s famous beach, has to be one of the most legendary hotels in the world, with the likes of Princess Diana, Brigitte Bardot and The Rolling Stones having walked its marble halls. With such a prestigious clientele, it’s only fitting the dining is top-notch.

The hotel is home to two Michelin-starred restaurants, including Mee by Ken Hom – but it’s the celebrity haunt Cipriani, headed by Nello Cassese, that enjoys global renown. Part of the Italian Cipriani dynasty, which started with Harry’s Bar in Venice in 1931, the restaurant marries authentic Italian produce with local ingredients, resulting in dishes such as salted cod with zucchini scapece and parsley, and wagyu carpaccio with red onion and pine nuts.

Forbes five-star listed and part of the prestigious Relais & Châteaux Collection, The Inn at Little Washington offers an unassuming, homely brand of luxury. The kitchen of the 3* signature restaurant opens onto the chintzy dining room, which glows under the romantic light of fringed silk lampshades.

Chef Patrick O’Connell serves American cuisine crafted using traditional French techniques, from savoury black pepper cheesecake with roasted baby beets to prosciutto-wrapped veal tenderloin, backed by a 14,000-bottle wine cellar. Craig Claiborne of the New York Times described it as “the most magnificent inn I’ve ever seen, in this country or Europe, where I had the most fantastic meal of my life”.

An icon of the Singapore skyline, Marina Bay Sands needs no introduction: one glance at its three-tower structure and sky-high infinity pool transports you to balmy evenings amid the glittering city lights. Exquisite dining options within the complex are endless, but it’s the 2* Waku Ghin, led by one of Australia’s finest chefs, Tetsuya Wakuda, that is the star in its gastronomic crown.

Marrying Japanese culinary excellence with the finest seasonal ingredients sourced from around the world, the restaurant serves a smorgasbord of flavours, ranging from seafood (oysters, caviar and carpaccio) to gyoza and fried chicken.

Looking for more culinary inspiration? Check out 5 Under-the-Radar Cuisines You Need to Know About.