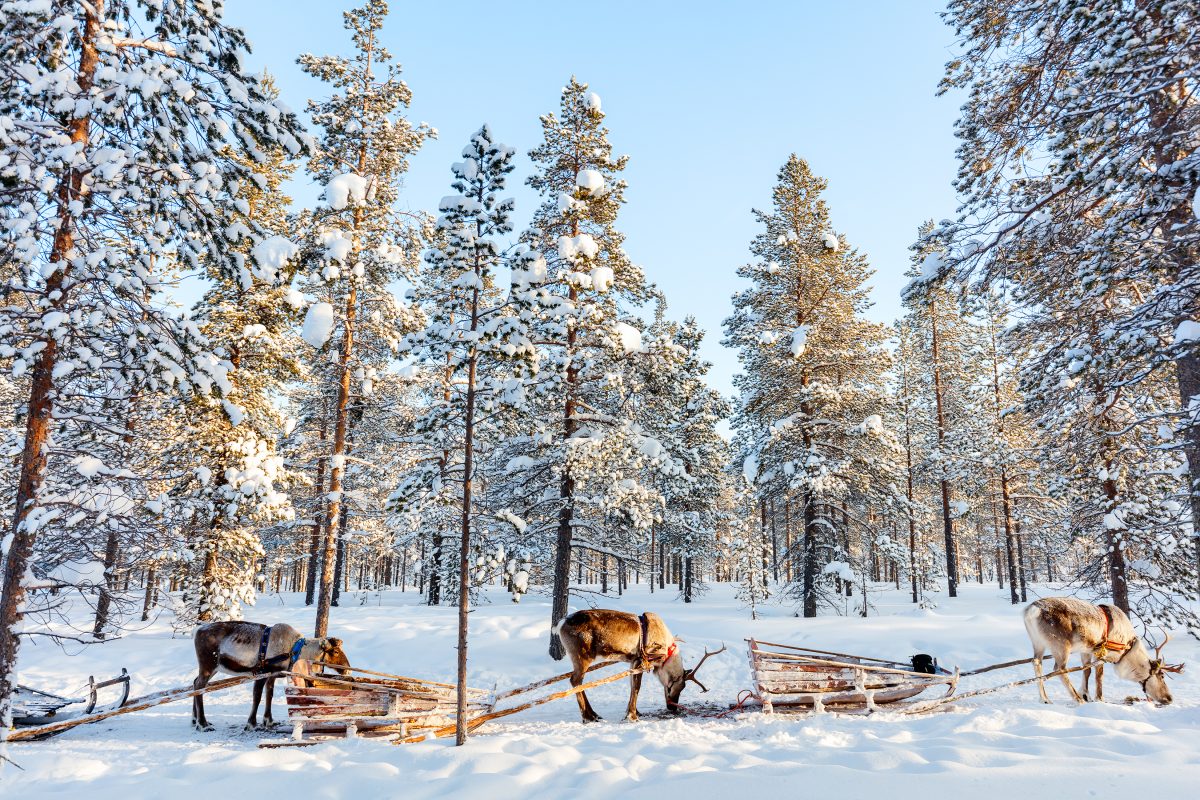 Christmas in Europe is a greeting card dream come true – and this is a love letter to the continent’s most wonderful time of the year.

Flurries of snow dancing on the crisp air. The smoky scent of chestnuts roasting over glowing embers. Fairy lights twinkling like stars against the inky sky. A hearty glass of red beside a crackling pub fire. Chilly fingertips brushing against cashmere gloves. Steaming mugs of gluhwein spiced with cloves and cinnamon. Glasses chinking, laughter, excitement. Handsome pines dressed to the nines in glittering trinkets and candy canes.

Everything they say about Christmas in Europe is true. There’s nothing quite like celebrating this most magical time of year in the deepest depths of winter, where the festive spirit burns brighter than anywhere in the world.

From dashing through the snow in Lapland to Germany’s Christmas markets, here are seven reasons why you simply must spend the big day in Europe at least once in your lifetime.

Even the most unfestive of folk will find it difficult to resist the whimsical allure of the traditional German Christmas markets, where the magic of the season instantly enchants all. Quaint wooden chalets house artisanal gifts and festive fare, from gingerbread hearts hanging on red ribbons to huge, doughy pretzels dusted in snow-like cinnamon sugar. Revel in the crisp chill of December temperatures that can dip below freezing, before being warmed by steaming cups of gluhwein (spiced wine) and Baileys-spiked hot chocolate – and, of course, the sheer magic of it all.

From Victorian-era arcades with their upmarket boutiques – such as the ‘jewel of Mayfair’, the Burlington Arcade, home to British fragrance house Penhaligon’s and N.Peal cashmere, whose store has stood proud for more than 80 years – to the well-heeled Harrods and artsy Liberty, it’s little wonder London’s shopping is renowned as some of the best in the world. There’s no better time to indulge than in December, when the twinkling Christmas lights of Regent Street dance overhead and the iconic red buses overflow with excited shoppers. Pause only for traditional afternoon tea at Fortnum & Mason or a glass of bubbling champagne under the tree at Claridge’s Hotel.

Does it get any more festive than a sleigh ride through the snow? The pièce de résistance of the festive season, the star atop the tree, the coin in the Christmas pudding, is a trip to Lapland: the spiritual centre of Christmas and Santa’s homeland, in Finland’s north.

Under the ethereal glow of the Northern Lights, rug up in a traditional wooden sleigh as you traverse the arctic landscape. There are as many reindeer here as there are people, which can be seen grazing majestically in the fells and padding through the freshly fallen snow. A Christmas fantasy come true.

A post shared by The Temple Bar Pub (@thetemplebarpub)

The Irish welcome is warmer than any other in the world, so you can only imagine the levels of festive spirit that are reached at Dublin’s most famous pub at Christmastime. Guinness fuels the merriment in this 19th-century inn, where dancing patrons spill out onto the cobblestoned street in a raucous whirl of laughter. Treat yourself to a cosy candlelit dinner here of Irish oysters followed by roast chicken, honey-glazed ham, cranberry sauce and all the trimmings, before finishing with a warming nightcap from one of Ireland’s largest whiskey collections – the perfect prelude to a walk home in the crisp winter air.

Those looking to embrace the deeper meaning of a Christian Christmas will find what they’re looking for in the ancient Vatican City, home of the Roman Catholic Church. The Midnight Mass at St. Peter’s Basilica, held annually on Christmas Eve, delivers a true sense of occasion to this special time of year. Be greeted by the glittering tree soaring into the night sky and nativity scene in St. Peter’s Square before taking up your place to hear the Pope’s sermon (tickets are required for entry to the mass, or it can be watched on the big screens in the square).

Outside the city walls are the countless resplendent churches of Rome, dripping in gilt and dressed in frescoes of Renaissance greats such as Michelangelo. Lit by the soft glow of candlelight and harbouring a silence and stillness that is scarce in today’s frenetic world, these sacred spaces provide a place for reflection at an ever-poignant time of year.

The City of Lights is a star in itself, but it never shines brighter than during the festive season, when fairy lights sparkle in the canals and the cold air invites lovers to snuggle ever closer as they traverse the city’s streets.

Embrace the romance of the season by ice skating at a festive rink, which in previous years have found their home at the foot of the glittering Eiffel Tower, at the Christmas market in the Jardin de Tuileries and on the sky-high rooftop of Tour Montparnasse. A particularly enchanting spot to get your skates on by night is the year-round Le Grand Palais des Glaces – one of the largest rinks in the world, sat beneath a soaring glass dome.

Skiing in the Alps, Switzerland

Nothing gets you in the festive mood quite like a little convivial après-ski after a day on the slopes. Where better to indulge than the alpine wonderland that is Switzerland? Its landscapes look like they’ve come straight from a Christmas card, with glittering mountaintops, wooden chalets, medieval buildings and mirror-like lakes, all sprinkled in a dusting of snow.

Immerse yourself in the chills and thrills of winter sports in the famous St. Moritz, Gstaad or Verbier, or for somewhere a little more off the beaten track, the wide slopes of Dachberg near the charming village of Vals, close to the Italian border. By night, warm up beneath twinkling fairy lights with a hot chocolate in-hand. Now that’s the definition of hygge.

Looking for more inspiration? Check out Paris in Winter: Experience the Magic of the City of Light.

Abu Dhabi-Do: 5 Things to Do in Abu Dhabi on a Stopover
The World’s Most Romantic Restaurants
Whale-Watching, Waterfalls & Wineries: Surprising Things to Do in Queensland
Archipelago Dreaming: 7 Surprising Sights in Florida Keys
Loading Comments...