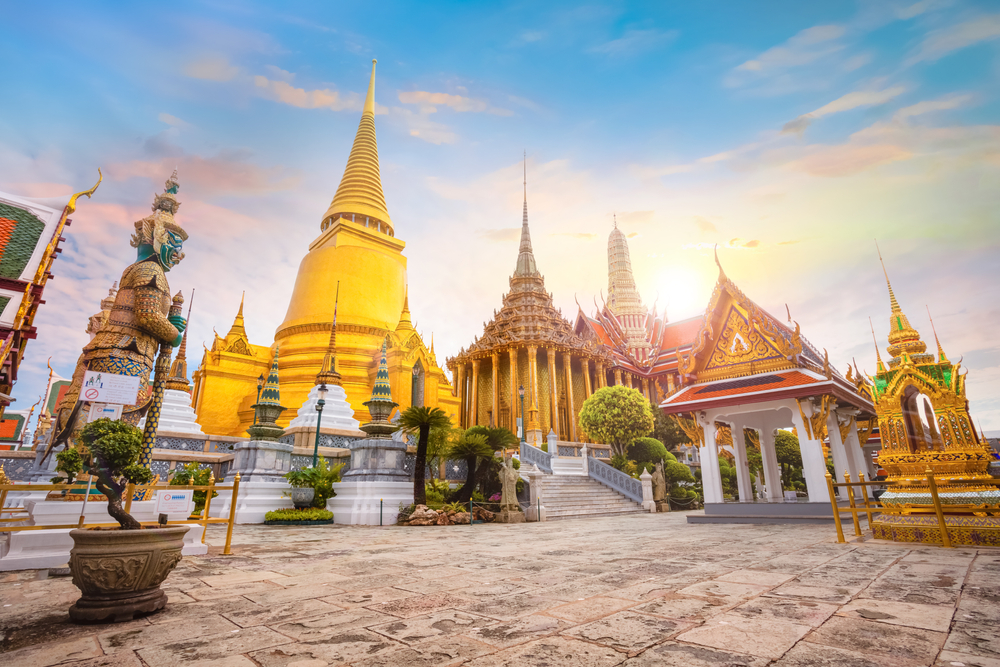 Scattered amid Bangkok’s glittering skyscrapers and bustling streets are ancient gems that tell the story of the Thai capital’s rich history.

Bangkok is the largest city in Thailand, with more than ten million residents. Due to its immense population density and colourful history, today Bangkok has also become one of the most diverse places in all of Southeast Asia. The rich diversity of its many communities and neighbourhoods provides tourists and locals with a cultural medley unlike anywhere else.

While this super modern city has soaring skyscrapers, gargantuan shopping complexes, a SkyTrain, many new hotels, there are still numerous sites of historical significance throughout Bangkok. Many of these historical sites are well worth exploring to get an idea of Bangkok and Thailand’s cultural and traditional origins. These are the top attractions in Bangkok for history enthusiasts.

The Grand Palace is one of the most respected sites in all of Thailand. With a glittering gold spire and exquisite temples, this complex is revered by the entire country. It is also home to Thailand’s most visited temple: Wat Phra Kaew, known as the Temple of the Emerald Buddha. Locals from all over the country flock to this temple to worship the Emerald Buddha, which is particularly busy on the weekends. However, it’s well worth the crowds: it may be small, but it is the most revered statue in the whole country. No exposing clothing is allowed, including shorts, skirts, or sandals, but sarongs are offered for use. Be sure to walk right to the entrance and buy tickets within (some unscrupulous ticket touts operate out front).

This beautiful green heritage property was home to none other than Lert Sreshthaputra, Thailand’s first developer. Built in 1915 next to verdant gardens, this teak wood house was originally open to the public as Bangkok’s first ‘Western style’ municipal park. Nai Lert Park Heritage Home was opened to the public in 2012 as a museum, filled with notable keepsakes and Sreshthaputra’s many accomplishments for the public to admire. This charming property should be high on any history enthusiast’s list, as it gives guests a superb escape from the busy streets of Bangkok, and transports visitors to the quaint early 1900’s.

While not in the city limits, Ayutthaya Historical Park is well worth the journey for history lovers. Set far away from the hustle and bustle of Bangkok by 90-minute fast train from Hualamphong, this UNESCO World Heritage Site is set on an island encircled by the Chao Phraya, Pa Sak and Lopburi Rivers. Boasting an assortment of over 400 temples, this magnificent island is something that everyone visiting Thailand should see. Ayutthaya Historical Park has countless ruins, but many of the shrines and prang Khmer towers have been brought back to life. The stunning location gives guests an eye-catching contrast between the rust-coloured temples and verdant greenery of the surroundings.

Chinatown in Bangkok is one of the best in the world. Consisting of webs of small passageways, incredible food, markets, temples and cultural richness, Bangkok’s Chinatown is one of most enjoyable spots in the city to stroll through. Wat Traimit Temple in Chinatown holds the largest image of Buddha in the world, weighing in at 5.5 tons and clocking in at 700 years old. In addition, Chinatown holds a host of old-fashioned shophouses that sell spices, foods, traditional trinkets and much more.

Comparatively unknown and worthy of a visit, Suan Pakkad Palace is made up of eight beautiful traditional Thai homes. With steep triangular roofs and lush gardens throughout the complex, it is surprising that this hidden gem is not busier. As the former home to Prince Paribatra, many of the Thai houses in Suan Pakkad Palace contain collectables and mementos from the prince’s personal collections, involving art, musical instruments, glassware and more. It also holds ancient pottery from Ban Chiang, a UNESCO World Heritage site.

The National Museum Bangkok is considered one of the largest museums in Southeast Asia. It resides in the front palace of the Boworn Sathan Mongkol Mansion, constructed in 1887. The museum houses a massive collection of antiques, artwork, items of cultural significance and exhibits from other Asian countries. You could spend an entire day in this museum, so if you like history, this is for you.

A true hidden gem for historical enthusiasts is the home of M.R. Kukrit. This heritage house and museum was home to one of the most gifted individuals of Thailand, who was a prime minister, artist, author and much more. The heritage home was built from disassembled houses in Ayutthaya, which were then reassembled in its current place in Bangkok. It’s also home to stunning gardens, a lotus pond and miniature mai dat trees. Within, visitors can walk through an informative museum housed in traditional Thai architecture.

Looking for more Thailand inspiration? Check out The Best Beach Clubs in Thailand.