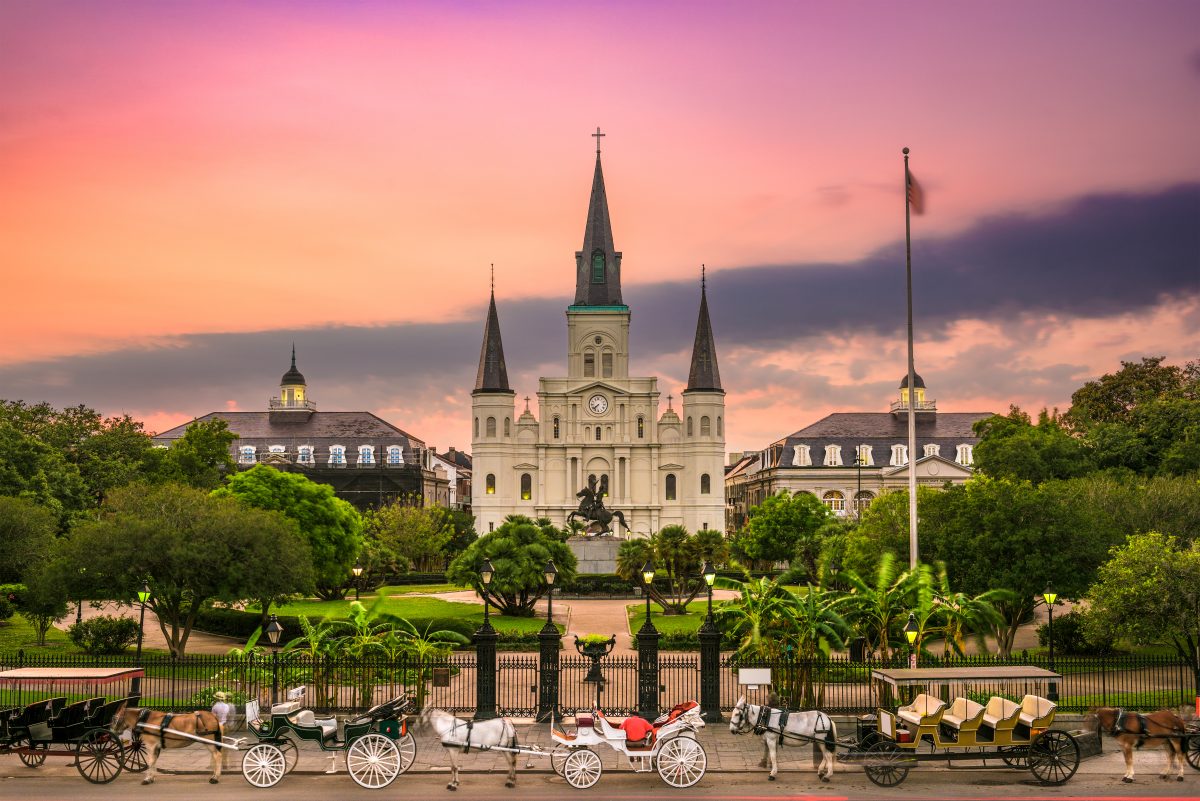 From golfing in the heart of the Sonoran Desert to sipping tempranillo in the Texan hinterland, these lesser-visited US cities offer an abundance of surprising experiences.

Already ticked off the iconic US cities? Big hitters like New York City, San Francisco and Los Angeles will often steal the show, but the under-the-radar US cities deserve a go in the spotlight with their incredible sights, fascinating history and plentiful soul. Whether you’re just passing through or are set on a longer stay, there’s never been a better time to explore America’s urban greats. From panning for riches in Golden, watching live jazz bands play in New Orleans or spotting dolphinfish in Monterey, we’ve rounded up a collection of the country’s best underdog cities that the entire family can enjoy.

Colorado’s historic goldrush precinct Golden is rich in experiences – whether it’s white-water rafting down Clear Creek, discovering the history of an iconic Wild West showman at Buffalo Bill Museum and Grave, or admiring vintage locomotives at Colorado Railroad Museum. If a pint of beer brings you cheer, Golden’s got you covered, with Coors The Brewery – the largest single-site brewery in the world – and heritage boutique saloon The Eddy Taproom & Hotel, a charming stay at the base of the Rocky Mountains.

Golden plains and steel planes abound in Wichita, Kansas’ largest city and the aviation production capital of the world. Discover the history of the state at Kansas in Miniature, an animatronics exhibit at Exploration Place that showcases Kansas of the 1950s. If you want to delve a little deeper, the cowboy-filled Old Cowtown Museum or the mighty Keeper of the Plains steel sculpture that rises high above the city, where the Big and Little Arkansas rivers meet, are well worth a visit. For a taste of opulent old Kansas, a stay at Ambassador Hotel Wichita should be high on your list.

A wealth of lush parks and gardens, microbreweries and the country’s best coffee roasteries – what’s not to love about Oregon’s super-cool state capital? Highly recommended is a stroll through Washington Park – this vast reserve features a traditional Japanese garden, arboretum and archery range. After days spent taste-testing craft beers, hiking the ruggedly handsome face of Mount Hood or going wild in Oregon Zoo, retreat to Royal Sonesta Portland for a luxury stay in the city’s historic downtown.

Flat in geography but sky-high in spirit, Fargo is bursting with small-town North Dakotan heart. Learn about the history of aviation and set your sights on an original Wright Brothers flyer at Fargo Air Museum. Meet mischievous, bamboo-munching Chinese red pandas at Red River Zoo before heading to the Plains Art Museum for a staggering collection of Indigenous, local and international art, including pieces from Andy Warhol and notorious man-with-a-moustache Salvadore Dali. Seeking a stylish stay at the heart of it all? Look no further than Radisson Blu Fargo.

Jazz-ruled and jambalaya-fuelled, New Orleans is a city that understands the importance of a good time. The city’s Mardi Gras – the two weeks leading up to Fat Tuesday where krewes carouse wildly through the streets – is famed throughout the world. Discover countless bars, nightclubs and jazz clubs in the city’s historic French Quarter, including the Jazz Playhouse at Royal Sonesta New Orleans, or savour locally revered soul food – one bite into a shrimp-filled po’ boy sandwich and you’ll never want to leave.

Crowned the ‘Live Music Capital of the World,’ Texas’s laidback capital has it all, from crooning country to international rock and frenetic bebop beats. While the city’s mad about food – some of the best niche food trucks in the country call Austin home – nearby Texas Hill Country boasts world-class wineries, breathtaking hinterland views and a uniquely Texan terroir. After days spent jamming out or walking the city’s vast collection of parks, lakes and nature reserves, retreat to Commodore Perry Estate for a glamorous mansion stay.

Become spellbound by Charleston’s antebellum charm, cobblestone quaintness and old-world splendour. Come for the history (Charleston was the flashpoint for the Civil War) and stay for the city’s lauded culinary scene. Here, you’re as likely to order grits and fried green tomatoes as you are faultless gastronomy. A gentle stroll through Waterfront Park reveals romantic glimpses of the harbour and mighty Cooper River. For those wanting a boutique stay brimming with character, look no further than Planters Inn.

If you’ve got a snake in your step and rhythm in your soul, Nashville – the lyrical soul of the south, birthplace of blues and country – can’t be missed. Walk the line at the acclaimed Johnny Cash Museum, or feast your way through the city’s iconic culinary scene: don’t miss Nashville-style hot chicken, the country’s feistiest sandwich that’s best washed down with an ice-cold bourbon and coke. For an award-winning retro escape in Nashville’s soulful heart, head to boutique bolthole Fairlane Hotel.

Once known as the anchovy capital of the world, Monterey today is a laidback surf haven. In addition to a world-class aquarium, sumptuous seafood and easy access to Big Sur’s spectacular coast, the city was home to legendary wild card Salvador Dali. A collection of the moustached artist’s etchings and lithographs can be seen at the city’s local museum. For stunning views of the Pacific Ocean and seaside bowls of steaming seafood chowder, stay at the surf-inspired Monterey Tides.

Surrounded by the vast, saguaro-filled expanse of the Sonoran Desert, Scottsdale stands as an oasis of luxury. Keen golfers rejoice – the city is considered one of the country’s finest golfing destinations with more than 200 world-class courses and home to the prestigious Phoenix Open. Head to Scottsdale’s historic Old Town for a taste of the Wild West, follow the city’s celebrated Public Art Trail or stay at The Canyon Suites at The Phoenician for sun-kissed days and evenings beneath the desert skies.

Ready to book your US escape? Discover our offers here.